WASHINGTON — Rep. Rick Larsen, WA-02, today announced that the Swinomish Channel in Skagit County will be fully dredged this year after receiving $2.277 million in U.S. Army Corps of Engineers funds. Larsen spoke to U.S. Assistant Secretary of the Army for Civil Works Jo-Ellen Darcy last week and stressed his support for funding of the project. 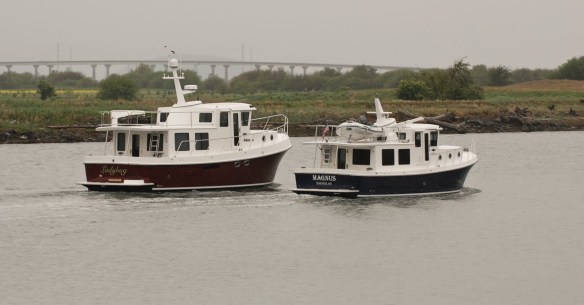 “This funding is a major boost for Western Skagit County, which depends on the Swinomish Channel as an economic driver,” Larsen said. “The channel is overdue for maintenance, but this substantial investment will make sure it is fully dredged this year. I told Assistant Secretary Darcy that the community strongly supports the project and I am pleased the Army Corps has recognized the value of this investment.”

The funding for the Swinomish Channel dredging is included in the U.S. Army Corps of Engineers’ work plan for fiscal year 2012, which was provided to Congress this week.

The Swinomish Channel, first dredged more than a century ago, extends through former sloughs and portions of the Skagit and Samish River delta deposits. Due to heavy sedimentation, the channel must be dredged at least every three years to maintain navigable depths for commercial and recreational vessels. It is authorized to a depth of -12 feet MLLW.

A sedimentation study covering 2004-2008 found that without dredging, the channel depth will reach -2 feet MLLW by 2015 at the north end and the same depth in the south end by 2019. This would render the Swinomish Channel impassable for virtually all vessels, which could cause the loss of more than 500 jobs in the Skagit Valley, according to an economic study of the issue commissioned by the Port of Skagit.

The Port of Skagit has led efforts to keep the Swinomish Channel open since dedicated federal funding for dredging the channel was eliminated in the mid-1990s. In recent months, a consortium of local stakeholders — including the Town of La Conner, the Ports of Skagit and Anacortes, the Upper Skagit and Swinomish tribes, Skagit County, Dunlap Towing and the Shelter Bay community — has formed to consider a permanent solution for funding channel dredging.

“It’s wonderful that the federal government is recognizing the significant positive impact the Swinomish Channel has on jobs in the Skagit Valley and to the nation as a whole,“ said Patsy Martin, executive director of the Port of Skagit. “Congressman Larson has been intimately involved in our effort to save the channel for many years. He understands the importance of the channel to jobs in this region, and we deeply appreciate his contributions.”

The Pacific Northwest Waterways Association has been working diligently with the Corps and the congressional delegation to secure this funding, Martin added. PNWA was able to effectively communicate the importance of this waterway to our region.

Get the latest from EYS!